About the Mitigation Wizard

The Mitigation Wizard is a web-based decision-support tool that helps users identify the potential impacts of their projects on special-status species and sensitive habitats, and then evaluate potential conservation or restoration project areas to offset them. The tool was developed to support Regional Advance Mitigation Planning (RAMP) by The Nature Conservancy, in collaboration with the Bay Area RAMP Technical Advisory Committee, to help infrastructure agencies, developers, natural resource agencies, and conservation practitioners in the Bay Area to do the following:

The Mitigation Wizard is freely accessible and integrated within the Bay Area Greenprint, which features extensive data and reporting depicting multiple values and benefits that nature and open space can provide to communities. This broader context can help users maximize the benefits of their projects for habitat, water resources, recreation, climate goals, and agriculture. Such benefits can help identify the potential for project partners across sectors.

How the Mitigation wizard Works

The Mitigation Wizard can identify impacts to a range of species and habitats from any project or suite of projects. Users can then edit the estimated acreages of impact and adjust mitigation ratios. Users who know the impacts to planned projects and mitigation need can enter their project impacts directly.

The Mitigation Wizard contains a series of filters that allows the user to search for opportunities for habitat protection or habitat creation/restoration, to identify the geography in which to search (e.g. specific watershed, county, distance from impact), to filter to just protected or unprotected land, the areas of highest conservation priority, highest species richness, areas within connectivity linkages, within a particular land cover, and/or more. Once filters are set, clicking Find Mitigation Opportunities will update the map. Over 100 other data layers hosted within the Bay Area Greenprint can also be viewed within Mitigation Wizard to further inform sites.

The tool allows you to limit your search for mitigation with a range of filters. You can search only within a certain distance from your project, only within certain watersheds, counties or other preset areas, or within a shape you draw. You can even upload a shapefile or KML as a fully customized area to search for mitigation potential. The tool also provides methods to limit your search to only certain landcover types, only lands that are or are not protected, and a range of other variables. From there, you can save your settings and share the report with a link, an export (PDF, Excel, shapefile), or run the mitigation areas through the Bay Area Greenprint.

How we estimate impacts and suggest mitigation opportunities

The Mitigation Wizard can both estimate the impacts of a project based on one or more footprint areas, and it can suggest sites for mitigation based on mitigation need for a range of species or habitats available in our Species Models. These models are described in detail below.

For estimating impacts, we use the full resolution data for each species model tied to a 30-meter "fishnet" grid, each covering 900 square meters or 0.22 acres. We have divided the entire Bay Area up into 30 meter squares and assigned an acreage amount to each square for each species under each model. When you draw, select, or upload a project area, we intersect that area with the fishnet and return the sum of acres for each species, as shown here: 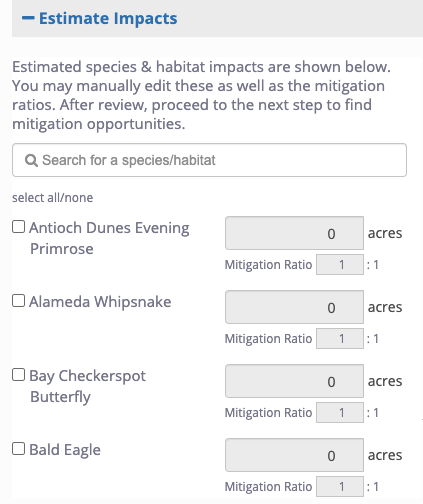 We take a planning unit approach for identifying potential mitigation areas. These functional units can be attributed with acreages of modeled species habitat and other attributes that can support filter options and additional criteria for conservation planning. With a set of 10 hectare (25 acre) hexagons, we attach total habitat acreage for species in each model, along with a range of other attributes. Many of those can be precalculated, such as land protection, land cover, habitat connectivity, and conservation priority (described below).

Other attributes of each hexagon are calculated dynamically as you use the tool. This is true of Habitat Coverage, Species Richness, and Habitat Rarity. Each of these is based on the suite of species you have selected for mitigation, so we can highlight those areas with the most or least habitat coverage, species richness, or habitat rarity for the specific species you have selected.

The application relies on several species model approaches and we provide all as options to users to achieve the best outcomes from the tool.

We have models for two purposes:

And then within each purpose, we have models based on several different types of data:

The methodology below describes these options in more detail.

For our habitat protection models, we compiled existing spatial data on the locations of threatened and endangered species, the distribution of land cover or habitats, and the locations of important agricultural lands. The amount of habitat likely to require compensatory mitigation was identified through the following methodology:

Other non-species resources that require offsets if there are impacts are: riparian forest, wetlands, vernal pools, and oak woodlands. These were selected from the land cover dataset (described below).

Restoration models for species used the same approach as the protection models described above. However, they included several land cover types in addition to existing habitat where restoration activity for a species might occur: agricultural areas, barren land, and Eucalyptus groves.

For restoration for ecosystems, the following methods were used:

We developed a "heat map" of conservation priority areas as identified by a number of organizations or academic studies. Each hexagon was attributed according to its overlap with each of the priority areas. Those included were:

A total priority score was summed across these 13 priority types. Finally, the score was normalized 0-100 based on the number of potential conservation priorities that could be designated for each hexagon.

Land cover data were compiled from several sources. The base layer used was the statewide "fveg" dataset produced by the California Fire Resource and Assessment Program (FRAP). This dataset is a raster grid of 30-meter raster cells classified into the major land cover types found in the California Wildlife Habitats Relationship (CWHR) model developed by the California Department of Fish and Wildlife. Where other finer-scale data were available, the fveg dataset was updated. These other datasets, in order of precedence (i.e. those higher on the list superseded those below) were:

These datasets were all crosswalked to CWHR land cover types.

Refinements to the Water and Wetlands Mapping

In 2022, we updated the Mitigation Wizard land cover to provide users greater flexibility in identifying mitigation needs and opportunities for water and wetlands. The update incorporated eelgrass beds (CDFW 2016), to supplement (and supersede) existing water and wetlands mapping in Fveg, BAARI Baylands, BAARI Wetlands, and NWI Wetlands, as outlined above.

Additionally, the tool was revised to offer users two levels of precision when differentiating water and wetlands:

The table below lists the categories in the two levels of water and wetland mapping in the Mitigation Wizard and provides a crosswalk relating the mapped features within the source data.